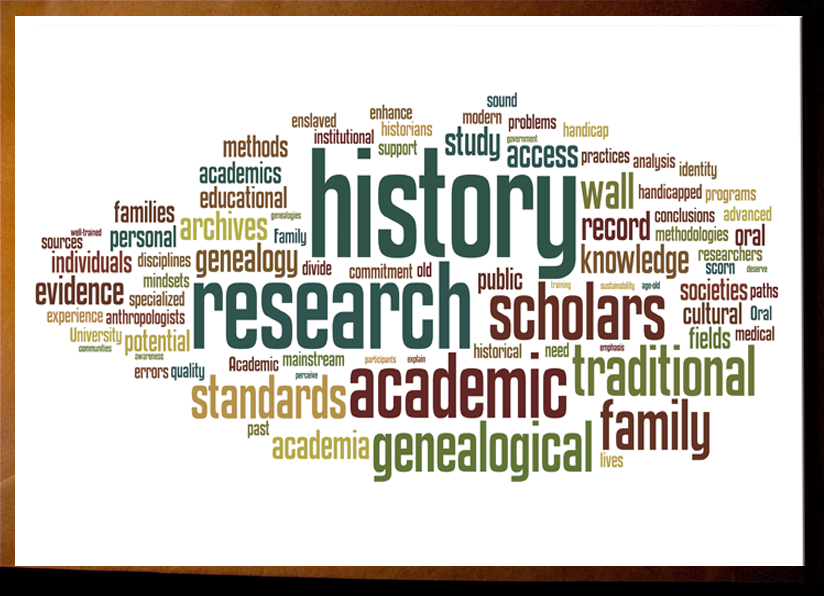 Yes. Seriously. From Boston University to Brigham Young, and across the waters to the UK’s Strathclyde, Dundee, and Open University—as well as many lesser-known institutions in between. A century-old wall is crumbling between academia and family history. Should we be concerned? Or should we embrace the possibilities?

Oral history has a long tradition of acceptance in the academic world. Family history has a much more checkered past. Good reasons exist for the status of both, but it is long since time for outmoded assumptions to be reconsidered.1  Here at Evidence Explained—a forum and a manual that serves both sides of the traditional divide—we see many ways that each can help the other and too many ways that old mindsets still handicap us all.

In many cultures studied by anthropologists, cultural demographers, historians, and other humanists, oral history has been the only kind available. Populations in which individuals could not write would have no historical voice if oral accounts and traditions were not accepted.

That said, in all societies across the eons, oral accounts have notoriously exaggerated the status of individual families, romanticized ancestors, and glossed over the rougher edges of the social group. Their counterparts in literate societies, published genealogies, have been testable against documentary evidence and their flaws have been easy to expose. More damning for genealogy, the traditional emphasis on minute personal details has come at the expense of meaningful context—the examination of individual lives within the framework of a broader history.

Because objectivity is a basic tenet of scholarship, the uncritical and preening nature of many works of genealogy—generically called family histories—have earned the scorn of those who seriously study the human experience. Narrowly focused genealogies have occasionally served as reference works for academics needing to quickly identify some minor participant in a significant event. Otherwise, only a few disciplines have been open to genealogical perspectives and only within a limited framework—as when anthropologists need to evaluate the self-image of a cultural group under study.2

Unfortunately, these academic users have also handicapped themselves. Individual and institutional unfamiliarity with the standards that exist in modern genealogy—indeed, the traditional assumption that family history has no standards at all—leads many time-pressured academics to indiscriminately accept any genealogical work that easily fills their needs. Too often, they miss vitally important works in peer-reviewed genealogical journals simply because, as some candidly admit, “genealogical journals aren’t among those normally consulted in my field.” There is a consequence. Using unreliable sources creates unreliable work, regardless of the interpretative skills of the scholar.3

Progress notwithstanding, the age-old breech has not been sealed between those who toil in history’s diverse fields. Today, that breech is not so much a divide as it is a firewall—one that handicaps us all. From the perspective of one who has straddled that wall for decades, I see three factions with distinctive mindsets:

In short: the professionalization of family history and its development as a discipline outside of traditional educational venues still remains unrecognized in too much of the academic mainstream. The limited interaction between the two educational paths and the limited awareness among traditional scholars of the rigors of modern family history still severely hamstring both sides of the divide.

As a field of study, genealogy offers tremendous potential to support other humanistic disciplines. Anthropology, archaeology, cultural geography, demography, history, and sociology all labor to explain social and political events that cannot be fully understood without accurately identifying the participants and knowing the personal relationships between them.

Academic researchers, however, face a serious handicap in their pursuit of this type of knowledge. Resolving problems of identity and relationship requires an intense commitment of time and specialized expertise in methods and sources. Those skills are still rarely taught within the academic system; and the time commitment is one that few academic scholars can make, given the publish-or-perish pressure of their professions.

Conversely, genealogical scholars remain handicapped by archival restrictions that deny them access allowed to other scholars. The online databases, indexes, and "look up" services that some archives offer in lieu of equal access are woefully inadequate to resolve many research problems—particularly those involving enslaved persons, the impoverished, and individuals without known surnames. The presumption existing in some archives—that genealogical or biographical research is a matter of looking up a name—is regularly disproved by genealogical scholars who apply advanced research strategies and analytical methods.8  They can only do so, however, when given access to the needed records that are open to other scholars.

Beyond traditional academic research, training in the practices and standards of genealogy would greatly enhance employment opportunities for graduates of humanities-based post-graduate programs. Skilled professionals—well-trained in research methodology, with diagnostic-level knowledge of the nature and legal underpinnings of myriad record types, a sound understanding of how to apply genetics to historical research to prove identities and kinships, and solid grounding in evidence analysis—are regularly engaged by U.S. courts and legal firms, archaeological and medical research projects, and government agencies charged with identifying and repatriating the remains of military personnel. The interdisciplinary research methodologies developed by the genealogical discipline would valuably enhance traditional academic programs.

Significant potential exists for academics, genealogical scholars, and family historians to assist each other toward their common goals. Will we develop that potential? Or will we persist in plodding the separate paths that limit and diminish the quality of work done by all?

1. For perspectives on this issue across the past half-century, see

3. For examples of this class of problem perpetuated in academic literature, corrected by the application of genealogical research standards, and published in peer-reviewed journals, see

4. Among the venues available outside traditional academia, the annual conferences of the National Genealogical Society and the Federation of Genealogical Societies, each, offer 100–200 hours of intermediate and advanced instruction in historical sources and research methodology by leading genealogical scholars and professionals. The U.S. National Archives has, for more than a half-century, hosted a summer institute, the National Institute for Genealogical Research, designed for advanced study of federally created manuscripts. Formal academic programs include those of Boston University’s Center for Professional Education (http://professional.bu.edu/programs/genealogy/), a program ACE-credited for 3 graduate-level semester hours and transferable to other accredited institutions, and Brigham Young University’s Center for Family History and Genealogy (https://history.byu.edu/), which offers both degree and certificate programs. Other educational venues are outlined at Board for Certification of Genealogists (https://bcgcertification.org/learning/education/), under the “Educational Preparation” tab.

5. The leading sources of this instruction have been the Institute of Genealogy and Historical Research, based for decades at Samford University but now at the University of Georgia (http://www.ighr.gagensociety.org/), which pioneered Advanced Methodology for historical researchers in the 1980s and has trained many academics; the National Genealogical Society Quarterly (http://www.ngsgenealogy.org/cs/ngsq), which specializes in instructive case studies; and the Salt Lake Institute of Genealogy (https://ugagenealogy.org/aem.php?eid=36) developed by associates of Salt Lake’s Family History Library. More recent programs include the Forensic Genealogy Institute of the Council for the Advancement of Forensic Genealogists (http://www.forensicgenealogists.org/forensic-genealogy-institute.html) and the Genealogical Research Institute of Pittsburgh (http://www.gripitt.org/).

6. For convenient but informal introductions to the interdisciplinary nature of modern genealogy, see the blogs The Legal Genealogist and The Genetic Genealogist.

7. Genealogy’s standards have been codified by the Board for Certification of Genealogists, which has led the evolution of standards since its creation in 1964. Its latest edition is Genealogy Standards: Fiftieth Anniversary Edition (Nashville, Tenn.: Turner Publishing, 2014). For a textbook approach to standards and practices of evidence analysis, see Thomas W. Jones, Mastering Genealogical Proof (Arlington, Va.: National Genealogical Society, 2014). The standard textbooks for the practice of genealogy are the two manuals edited by Elizabeth Shown Mills: Professional Genealogy: Preparation, Practice & Standards (Baltimore: Genealogical Publishing Co., 2018), whose 26 chapters are authored by 22 leading professionals, and its predecessor Professional Genealogy: A Manual for Researchers, Writers, Editors, Lecturers, and Librarians (Baltimore: Genealogical Publishing Co., 2001), whose 29 chapters were authored by an entirely different team of experts.

8. The case studies published by the National Genealogical Society Quarterly regularly demonstrate this point. For that reason—particularly their value in reconstructing the lives and families of slaves—NGSQ articles since the 1990s are frequently included in “catalogs of recent scholarship” published by academic history journals. For representative examples of those case studies, see

Yes. Seriously. From Boston University to Brigham Young, and across the waters to the UK’s Open University, Strathclyde, and Dundee—as well as many lesser-known institutions in between. A century-old wall is crumbling between academia and family history. Should we be concerned? Or should we embrace the possibilities?