DNA, GPS & Proof: Tightening the Loose Screws on our Tripod 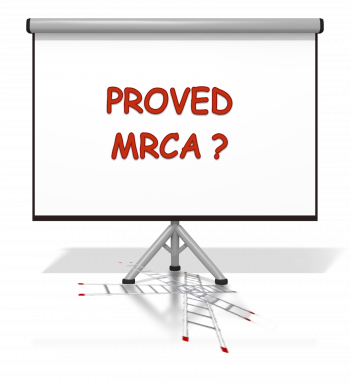 Two postings ago, we posed this thought: “Past first-degree relationships, DNA testing does not supply quick and easy answers to ‘prove’ a relationship.”

Yesterday, we posed a problem—along with the kind of “solution” we often see, now that the abracadabra of DNA testing holds forth all kinds of magic. For the record, it was not just a hypothetical problem. It was an anonymized version of a case-study manuscript submitted to a peer-reviewed journal. The manuscript was not accepted.

The “DNA evidence” that Ann, Bob, and Carla all descend from Will Whoozit is evidence of a kinship—through somebody. Their “conclusion” that Will Whoozit was that somebody is only an hypothesis. It falls short of the GPS in major ways.

Triangulation, in DNA-speak is a tripod. Ann, Bob, and Carla are the three legs of this tripod. All three share a match of a significant size. Each matches both of the others. That’s good. But that’s the starting point toward a conclusion. At least two more issues remain to be addressed and they may be neither quick nor easy.

Each leg of the tripod is a ladder that connects the tester to the hypothetical common ancestor. Each ladder has rungs. The tester is the bottom rung. The proposed MRCA is the top rung. Each generation between the bottom and the top is another rung.

Now for the kicker: The GPS has to be applied to each rung of each ladder. For each claimed parent-child link, Ann, Bob, and Carla have to apply the five criteria of the GPS:

A ladder with a broken rung is not one we want to trust.

Tree completeness matters. Ann, Bob, and Carla all think they have a Whoozit family in common. But can they prove they have no other ancestors in common? Have they identified every direct ancestor in their tree within the six generations involved in their attempt at matching? Does their identification of each parent-child relationship—in all branches—meet the GPS?

How complete is their tree past the point of the proposed MRCA? Do they have missing or broken rungs two or three generations further up the ladder? Yes, total-segment matches of x-number of centiMorgans suggest a certain degree of kinship. But when individuals have multiples lines in common, the cumulative effect may mean that a shared segment is more distant than the relationship predicted by the testing company.

It’s a point of fact that most people have their own “communities.” Rural or urban, they choose mates within those communities. Past families not only married each other in multiple combinations in the same community but also migrated together and intermarried in the new locales. The possibility of Ann, Bob, and Carla having more than one ancestral line in common is often greater than most people expect—until they study their families much more thoroughly than Ann, Bob, and Carla have done.

Tree completeness is an issue that has to be addressed. One way or another.

As we began by saying: DNA testing does not supply quick and easy answers to prove a relationship. Even when the answer seems obvious, considerable work may still be needed before that hypothesis can be proved or disproved.