Yesterday’s test document was a doozie. At least, its handwriting was. But, of course, EE didn’t choose it because of the handwriting. We chose it to see what researchers would “do” with this kind of record and what their takeaway would be. (That, of course, is why we unceremoniously squelched Lawyer Judy and Paralegal Chris from the onset.) 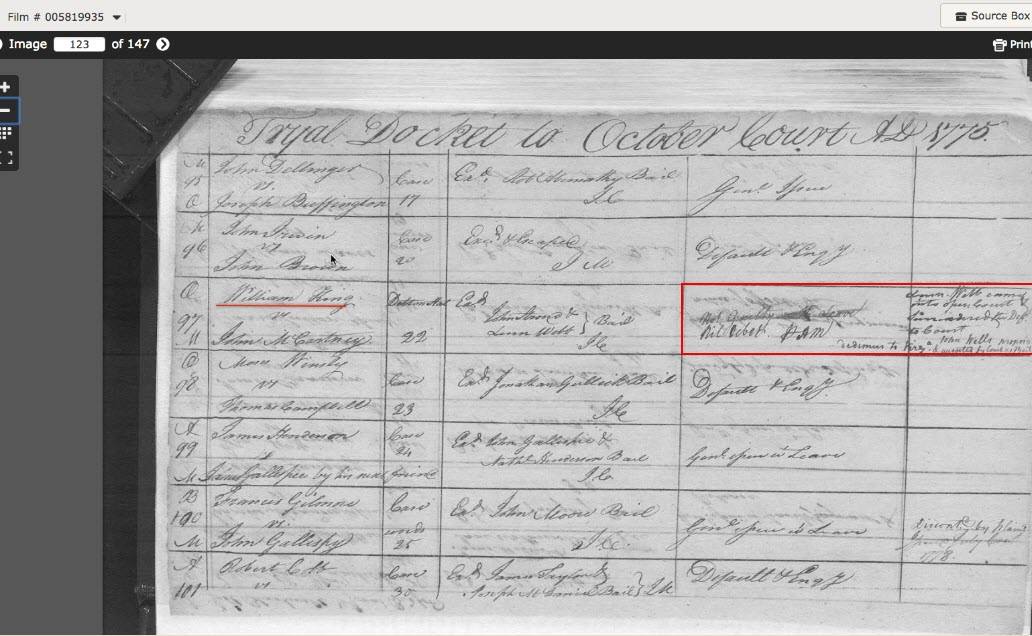 As for what the document says ...

First, a couple of gold stars go to Ann Donnelly and Scot Wilds, who used the visual clues in the image to find a hi-res image copy of the full register.1 That, of course, is the first thing one should try to do with an image like this.

In fact, we’ll award Scot two gold stars because, by studying the pages before and after this one, he extracted the headers that we need for each column on this page where no columnar headings appear. That’s another should-always-be-mandatory step. Reading a larger sample of the document also gave Scot a broader sample of the handwriting so he could better decipher what he was reading.

Ann also notes that Linn Webb came into court and surrendered the defendant to the court. Yep. But why would Linn do this? Column 4 gives us the answer: John Stroud & Linn Webb were “Bail” for this defendant. They had served as sureties to the debt for which Column 3 tells us McCartney was being sued. Stroud and Webb had agreed to pay McCartney’s debt, plus any damages and court costs, if McCartney failed to pay or failed to appear in court, when summoned, to satisfy the debt,etc. Webb made sure that McCartney showed up.

Ann also points out that “Not guilty with __?” is written under a smudged attempt to erase it. EE reads the phrase as “Not Guilty—with Leave.” (Yep. That's a legal term, too. As Judy suggests, look it up in Black's Law Dictionary.2)

Below that smudge is the “plea” that our test specifically asked about. Ann got the first word but had trouble finding the rest in Black’s. We’re not surprised. EE has not found that phrase either in two different editions we regularly use—one current and one antiquated—even though the plea is regularly seen in court actions of this time and place. (Black's does offer us a nice variety of nihil-this and nihil-that to study for future use.)

The full phrase nil debet as Scott accurately identified it (variously, nihil debet) is easily found in Bouvier’s Law Dictionary, 1856 edition, conveniently online at the Constitution Society http://www.constitution.org/bouv/bouvier_n.htm. That makes another point. We need more than one legal dictionary when working with old court records.

Then there’s that “dedimus to Virginia” (precisely, Virga) that Scott notes in the colum for actions by the court. Actually there are two actions there. First there’s the dedimus to Virginia. Then we see “John Wells proposed & accepted by Court as Bail.” Hmhh. Two men have already pledged their pocket books and bank accounts on behalf of McCartney. Why is a third bail needed?

Okay ... so the defendant pleads nil debet and the court orders a dedimus. What does that tell us?

As Scott points out, this legal term means “he owes nothing.” But, as with most Latin phrases used in court records, there’s more to it than the basic definition we can read in an old law dictionary. It helps, in cases like this to dig into the wealth of other legal treatises we can find online at sites such Archives.org and Hathi Trust.org. Below, for example, is John Bouvier’s discussion of nil debit in the 1850 multi-volume publication, Institutes of American Law. (It’s fascinating what we can turn up by Googling for a legal term.) 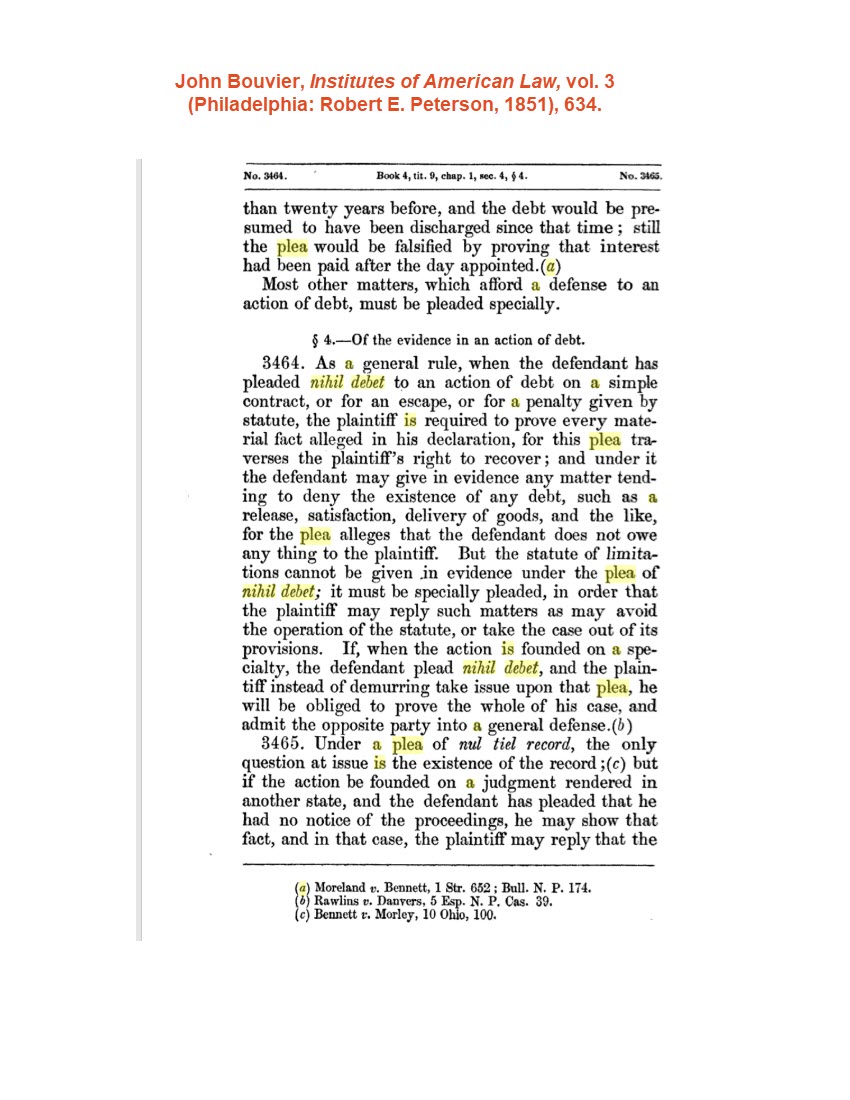 Black's offers us multiple options for this one. As a generalization, it’s a writ issued to someone to authorize them to do something on behalf of a judge or court. Which leads to a couple of more questions:

And then the biggest question of all:

If you were researching McCartney, what would you do now? Enter the details into your database and say, “Hmhh. Interesting. But it doesn’t tell me what I need to know about my dude”? ... Or?