For some years, academics have used genealogy sites for source materials. That is good. It is not good, however, when they accept material at face value, without a critical examination of what they are using.

Today’s “test” is a case in point.

As one who straddles the divide between “academic history” and “family history,” I frequently serve as a peer-reviewer for university presses. One such manuscript provides today’s example. In this anonymized case, the author wrote extensively about "Young Lemmas of Company B, 1st Arkansas Regiment, C.S.A." As a source for Lemmas’s military service, the author cited (I quote, in its entirety):

Older links to RootsWeb materials, as most of you know, are now useless. This one was operable when I evaluated the manuscript. At that time, I captured two relevant images. As background, I’ll tell you what you are seeing.

The contributor of this material to RootsWeb had digitized an 1867 publication: Report of the Adjutant General of Arkansas, for the Period of the Late Rebellion, and to November 1, 1866 (Washington: Government Printing Office, 1867). An appendix to that publication contained troop lists, by regiment and company.

The RootsWeb contributor created a database for that appendix. The database organization is shown in the first image ("Appendix A").

Clicking on a specific company, when the site was active, brought up a stylized “replica” of each company’s list. Image 2 depicts the relevant page of Co. B, 1st Ark. Reg't. Using brown paper, to invoke a sense of age apparently, the lists were either retyped or else OCR’d with the necessary corrections. 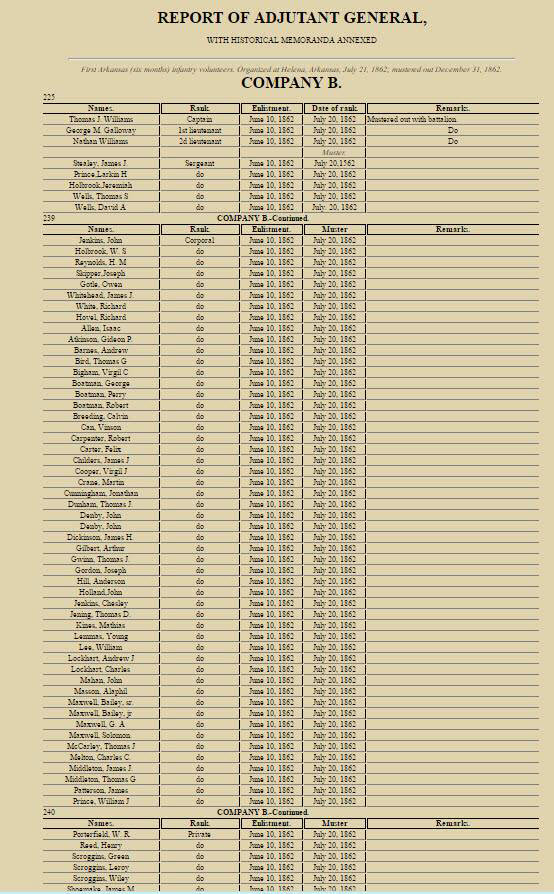 And so, your test: Do you see a problem with using the above list as your source for Corporal Young Lemmas?

(Hint: the answer here does not involve either a critique of RootsWeb material as a source or problems with the citation.)