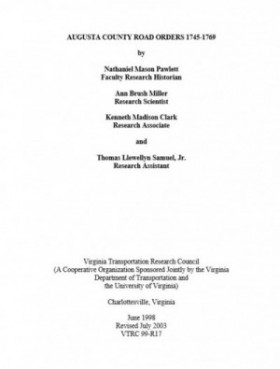 This week we have focused on a critical skill for researchers: Taking research notes that do not simply “extract facts” but also allow us to study the context of those facts.

In Part Two we challenged you to study a “research note” detailing the 1755 processioning of lands in Augusta County, Virginia. Glenn and Scott accepted the challenge. Both focused on neighborhood patterns and implications of kinship. Now, we’re build on their observations.

Yesterday, in Part Three, we addressed clues to landownership vs. leases. Today we tackle two other areas: The sequence of names and kinship clues.

Glenn questioned the arrangement of two parts of the list: First, the initial entries (which we addressed yesterday) and then the end of the list, which contains a notable number of uncompleted processions.

Processioning lists, which usually represent a militia district, are not usually grouped according to a particular “type” of activity or ownership. We see this non-grouping, starting with the names of the two men appointed to do the processioning, William Henderson and Thomas Stewart. Even though they played the same role in this activity, they did not group themselves together, either first or last. Henderson is the fifth tract processioned. Stuart is the forty-fifth of forty-seven.

Processioners, like census takers, typically followed a path that went from farm to farm. Often, when we plat landholdings and analyze the results against a processioning list, we find that the men appointed by the colonial vestry (the local church board) began at the parish church and moved out from there, farm by farm, following the sames roads we can document from the local county court minutes.* Typically, the processioners looped around the district, following that network of roads, and worked their way back to the beginning point.

On the present list, as Glenn notes, most of the “failed efforts” fall toward the end of the list. While it is tempting to conclude that these represent farms from elsewhere in the district that were arbitrarily clustered together here as a group of non-performances, we have to question that impression. Consider this cluster, in sequence:

The alternating of non-processioned lands amid processioned lands argues against a conclusion that the non-performances were grouped together. Deed and grant study reaffirms that these individuals, with varying situations, were indeed listed amid their neighbors.

Because processioners went from farm to farm, adjacent names on a processioning list were not only neighbors but, often, kin as well. As Glenn pointed out, the neighborhood pattern is immediately obvious with the first three tracts of land in which the witnesses for one processioning were the same individuals whose land was the next to be processioned.

That pattern is repeated in other clusters through the list. Even when no witnesses were present for the processioning of a particular tract, we see successive same-surname entries that imply kinship, as with

These, of course, represent just the cases in which same-surname landowners are adjacent. Many of those other-surnamed neighbors prove to be kin also, if we take the time to study them. Their records may contain the information we need to break through our own brick walls.

Do you see other patterns we have missed?

*For Virginia counties, researchers under the direction of the state’s Department of Transportation have combed the older surviving county court minutes and extracted road orders. These are available in county-level books through bookstores such as Amazon, but are also free online at the Department's website. The Augusta County road order extracts are athttp://www.virginiadot.org/…/…/online_reports/pdf/99-r17.pdf. For other counties use the search box at http://www.virginiadot.org/info and the term "county road orders."