The Importance of Context 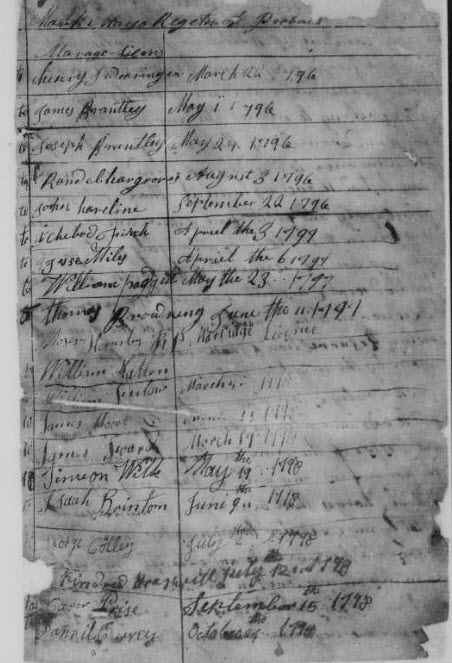 Today’s image is from Montgomery County, Georgia. At its top, we see “Mark Mayo Register of Probates.” Under that, “Marriage Licens.” The dates range from 1796 to 1798.

One man on my research list for Montgomery County was named Moses Hornsby, a man born 9 December 1749.1  Moses had married in Fairfield District, South Carolina, before moving to Georgia. He was a newlywed on the 1790 census of Fairfield, where he was said to be over 16 with two females—ostensibly a wife and daughter.2 Eventually two of their sons migrated to Texas, where their family records named his wife as Katherine Watts, from a nearby Fairfield family.3 So, even though upcountry South Carolina did not maintain marriage records at that time, we have a wife’s name and a time frame for Moses Hornsby’s marriage.

Descendants, all these years, have said that the girl he married in South Carolina was the mother of all his children.

But then I discovered this record.

There was only one Moses Hornsby in that time and place.  He is here, on this list of men—a list labelled marriage licens[es]. If we look only at this record, and  take its words at face value, the superficial conclusion is that  Moses Hornsby has taken a second wife, between June 1797 and March 1798.

But we cannot just take a record at face value. We must always study the context of the information.

As background, you should know that this list is the only known form of “marriage records” that exists for Montgomery County during these years. The list is not in a register of marriages. It’s just a loose scrap of paper that has been microfilmed along with other loose scraps of paper from the courthouse.

To develop the context for this one sheet of paper, we begin by studying all its entries. Do you see an anomaly on this page? I see three:

Why is he being treated differently from all the other men on this list of “marriage licenses”?

Unexplained oddities should always be a madly waving red flag, telling us that we need to stop and study what’s going on.

Eventually, with much more research, I could prove that the wife Moses Hornsby married back in South Carolina, Catherine “Caty” Watts, was still alive and still married to Moses as late as November 1821.4

Never mind this Georgia document that seems to say Moses Hornsby married again in Georgia. He didn’t. When we put this one-line entry about Moses into the context of all the other entries on this page—their construction and their wording—we’re left with a totally different interpretation of the record.

Moses Hornsby was a minister—apparently of the Reformed Presbyterian faith—who, between June 1797 and March 1798, was granted a license to marry others.