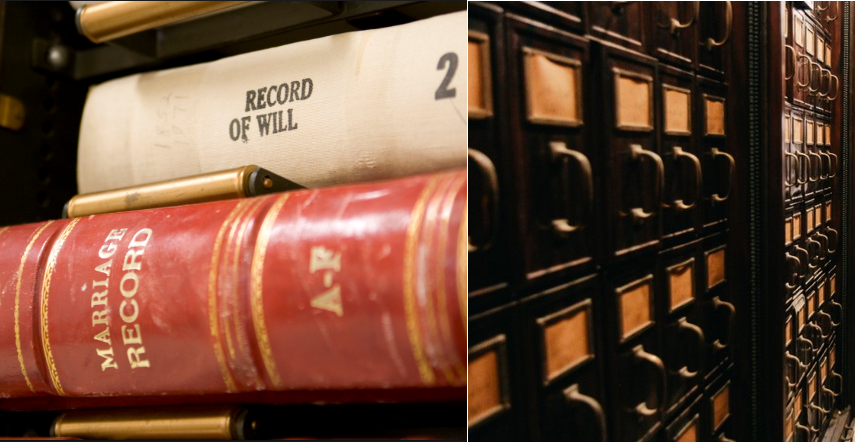 Many of the records maintained in America’s courthouses—records that historians and some other fields generically call “primary” sources—are duplicate originals or record copies rather than true originals.

Does it matter? For the next several postings, we’ll consider the processes that created these legal records, the reasons why differences matter, and characteristics by which we can recognize the type of record we are using.

Federal Rule 1002(4), defines a duplicate original as "a counterpart produced by the same impression as the original, or from the same matrix, or by means of photography, including enlargments and miniatures or by mechanical or electrical rerecording, or by chemical reproduction or by other equivalent techniques which accurately reproduce the original."

In everyday practice, this definition includes the digital images and microfilm often used by historical researchers. Under Federal Rule 1003, in most circumstances a duplicate would be as admissible as the original. For our own research purposes, that uusally holds true.

However, Federal Rule 1003 also mandates that the presenter of a duplicate is obligated to explain why the original is not submitted. Careful historical researchers make that distinction also. To do that, we need to understand the processes by which records were created and maintained.

Historically, attorneys presented the court with documents critical to the case at hand—contracts, depositions, petitions, probate inventories, etc. Early Americans who acquired or bequeathed property (as well as witnesses to those records) also brought deeds and wills to court, acknowledging their own personal actions or attesting the validity of a signature they had witnessed. Sometimes we find mere references to these in court minutes (the registers in which court clerks made brief notations about what transpired that day while court was in session), but we don't find the documents themselves. In more modern times, attorneys or individuals have presented those property records directly to court clerks, to have them recorded.

However ... and this is a big however: those documents presented to courts were not necessarily “originals.” Many were “duplicate originals,” matching copies created more or less simultaneously. Many property owners, who did not want to risk a deed or will being lost, were willing to pay their lawyers (or local notaries or justices of the peace) to make duplicates or triplicates.

What happened to those records, once they were brought in for legal processing?

When you use a digitized or microfilmed record, do you note whether you are using a “loose document” or a bound register? When you use the recorded version of a document, do you check for marginal notations that refer to a “more original” form?

Given a choice between a “loose” document or a recorded one, which would you choose?

I've learned (esp. thru taking the BU genealogical research course) to note whether I'm reviewing a "loose document" vs. a bound register, whether or not I'm in the courthouse actually touching documents or I'm scrolling thru microfilm or digitized images.

If I had the choice, and both versions were available, I would want to see the "loose" document and the bound one.  The "loose" doc might be "more original" but maybe not, as it might have been one of several copies the deedholder had.  Discrepancies between the versions would obviously need to be noted.

It all comes back to those timeless questions -- why and for what purpose(s) was the record created in the first place?  Might there be another copy somewhere else?  And if so, where?

(Finally, this is all starting to sink in for me, and I see the connections -- years ago, I used to think one copy was just as good as another..  The key, for me anyway, is to SLOW DOWN and think about all this as I search and analyze.)

Cathmary, you just nailed the two most important words in any researcher's life: Slow down!