QuickLesson 2: Sources vs. Information vs. Evidence vs. Proof

Sources give us information from which we select evidence. If our research is thorough and we have soundly analyzed our findings, we might reach a conclusion. The body of evidence on which we base that conclusion is our proof.
As students, we learned to classify sources into two types, as a basis for evaluating reliability. Primary sources, theoretically, would be original, contemporary records. Secondary sources, theoretically, would be hearsay, the writings of others, and materials of that ilk.
These terms are classic. Yet the division between them is illogical. Even when a source is an original document, its information might be hearsay. Often, derivative sources will convey firsthand information—as, for example, a transcription or translation of a document. Too, a single sentence in any document can represent a mixture of both firsthand and secondhand knowledge.
Today, many historical researchers build their conclusions around a stronger framework that evaluates three separate elements: the source, the information within the source, and the evidence we draw from that information.

Sources are artifacts, books, documents, film, people, photographs, recordings, websites, databases, etc. Our evaluation of a source begins with its physical form: that is, whether it is an original or a derivative. Within this context, we consider such physical qualities as the condition of the record, the legibility of the image or the penmanship, or the skill with which the derivative was made.
Information refers to the content of a source—its factual statements or its raw data. The strength of any information depends upon the knowledge of the informant. Firsthand knowledge represents primary information. Hearsay or secondhand knowledge produces secondary information.
As careful researchers, we note these differences when we extract material from a source.

The information statements we find in sources are not “facts.” They are only assertions. Many assertions in historical records are false. Many statements are ambiguous or open to interpretation. Many words used in the past carried meanings different from those we apply today.
Evidence is our interpretation of a piece of information that is relevant to our research problem. If the evidence explicitly addresses our problem, it is direct evidence—which may or may not be true; we still need to support it with other evidence, independently created. If our evidence is in some way relevant to our problem but it does not explicitly state a solution, then we have indirect evidence. In that case, we might combine it with other evidence to build a case.

No single source can prove a point of history. Sources err. They quibble, exaggerate, and misremember. Sources are biased. They have egos and ideologies.
Sources inform us, but the proof we ultimately offer will be the body of evidence we assemble to support our conclusion. Sound conclusions reflect four things:

Reaching sound conclusions about the past requires us to think past all labels. We cannot assign points on the basis of categories and seize upon whatever chalks up the most points. When we have conflicts between sources, we cannot count how many sources agree and how many disagree, then go with the “consensus.”
On the other hand, when we have conflicts and stalemates in our research, we often find the roots of our problem by thoughtfully considering three things—source by source, line by line:

This type of thoughtful analysis will reveal holes in our research. It will spotlight flaws in our logic. And it will point the way to additional records of value to our research.

In QuickLesson 1, we saw how our research can be impacted by the kind of source we choose to trust. There, we considered an original document vis à vis a derivative. Here in QuickLesson 2, we consider the role of information and the analysis process by which we convert information into evidence.
Again we have two documents.  Document 1, below, tells us that two men named Wyatt Earp and John Shown committed “larceny” in the Indian Territory in 1871. It also tells us that a judge at Fort Smith, Arkansas, issued a warrant for their arrest.1 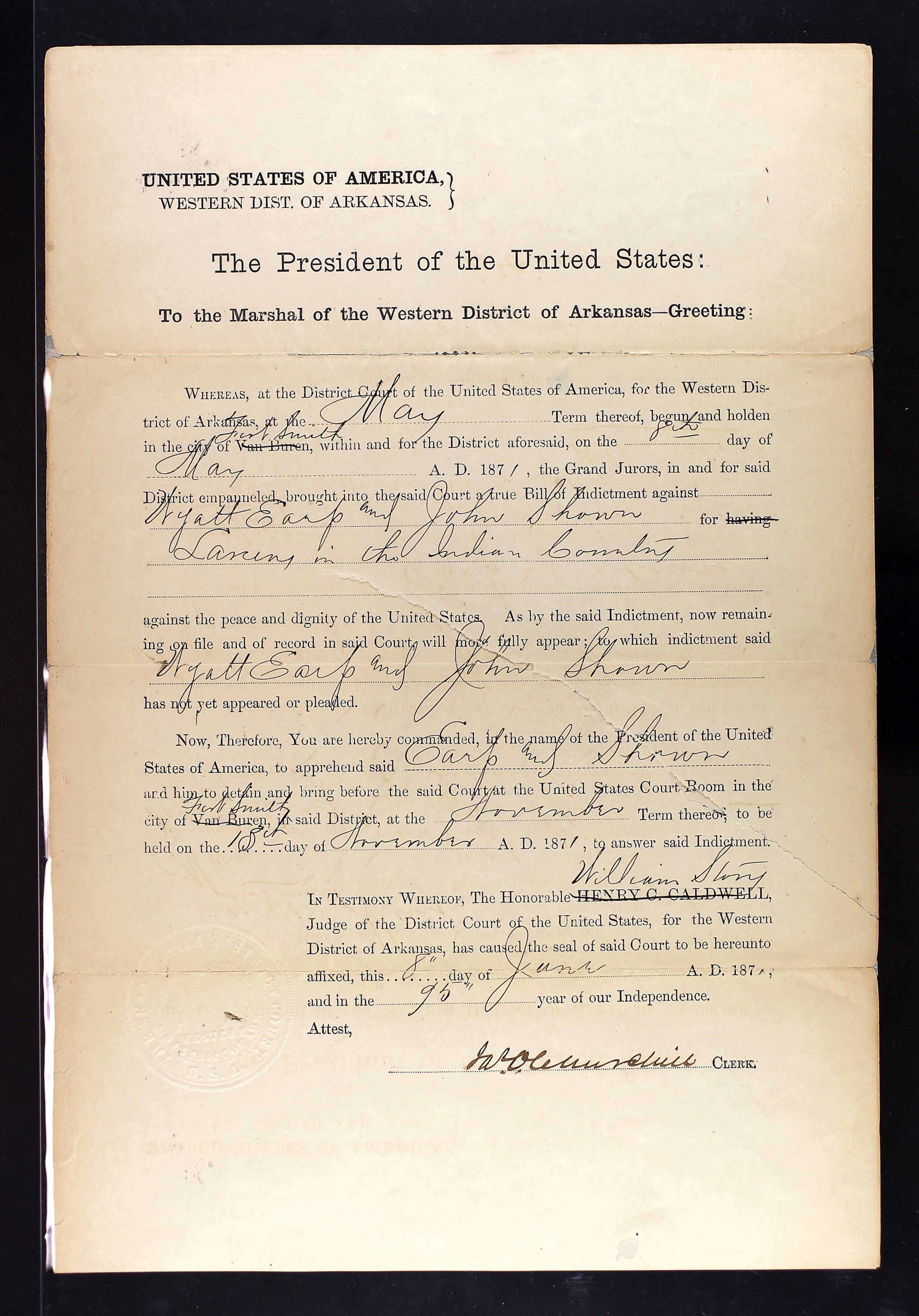 That warrant is an original document, in proper custody: the federal district court files held by the National Archives–Fort Worth. The warrant was created in the midst of a legal proceeding, by the appropriate authority. Its content is quite legible.
Yet the document and its information do not provide proof that larceny occurred. If it did occur, the document does not prove that either man committed it. Its information does not identify either of the accused in enough detail to distinguish him from other same-name individuals. Indeed, the record leaves us with many questions we need to answer before we know what to make of it—starting with these:
Document 2  (below) introduces us to one of the other records in this criminal case file: the testimony of Anna Shown, wife of John.2  A quick read of this document demonstrates the difficulty of trying to evaluate the record by the classic labels "primary source" vs. "secondary source." 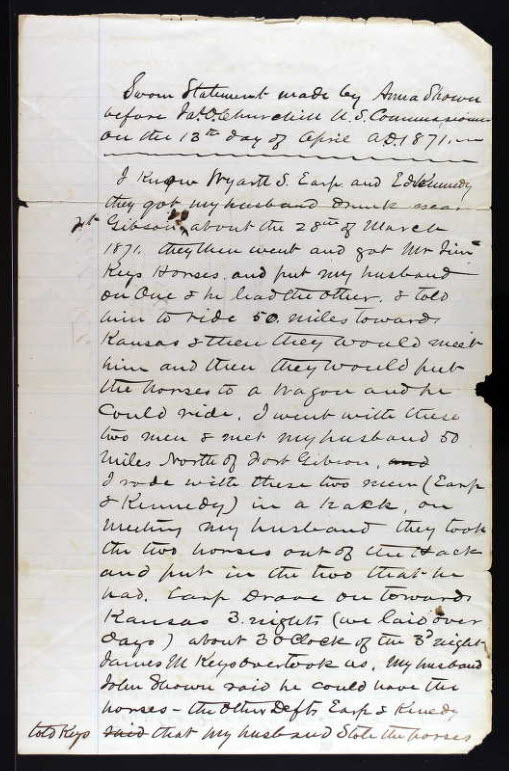 Again, the document is an original record, created in a timely manner. The witness was an actual participant in some of the activity. She had firsthand knowledge, primary information, to offer—but only for some of what she said.  Other parts of her testimony were mere hearsay—secondhand and thirdhand information offered within an original source.

Appraise this document for yourself. What do you find credible? What red flags or weaknesses can you identify? What clues can you find in this record to guide your research into new areas?

Research is not a process in which we “gather facts” that, at some point, we assemble into an account of “what happened.” None of us can ever know the truth of any past event. As researchers, with every case in which we are involved, we are the prosecutor, the defense attorney, the judge, and the jury. Every “find” we make is a mere assertion, whose validity we try to prove or disprove. The more thorough our investigation, the more evidence we find, and the more thoughtfully we appraise that evidence, the greater our likelihood of building a case that represents what likely happened.
1. Writ of arrest, 1 April 1871, John Shown and Wyatt Earp, Jacket no. 59; Criminal Defendant Jacket Files, U.S. District Court, Western District of Arkansas, Fort Smith, 1866–1900; Records of the District Courts of the United States, 1685–1991, Record Group 21; National Archives–Southwest Region, Fort Worth, Texas; imaged in "Fort Smith, Arkansas, Criminal Case Files, 1866–1900," Ancestry (https://search.ancestry.com/search/db.aspx?dbid=2117 : downloaded 30 October 2018) > Fort Smith Criminal Defendant Jackets > Jackets 0051–0100 > Jacket 0059: Calilhe–Ok > Folder "Earp, One & Earp, One" > image 59.
2. Sworn Statement Made by Anna Shown,” 13 April 1871, ibid.; imaged Fort Smith Criminal Defendant Jackets > Jackets 0051–0100 > Jacket 0059: Calilhe–Ok > Folder Earp, Wyatt S.–Kennedy, Edward–Shawn, John > image 47.

Sources give us information from which we select evidence. If our research is thorough and we have soundly analyzed our findings, we might reach a conclusion. The body of evidence on which we base that conclusion is our proof.