The FHL stores microfilm made by other archives. In the catalog, it is stated who created the microfilm and where it is stored. Is it essential to identify the creator of the film in the citation?

The catalog entry for the film above is here: https://www.familysearch.org/search/catalog/482644?availability=Family%20History%20Library

How would you recommend handling this?

If the name of the creator should be identified, I have two follow-up questions:

To add to the confusion, sometimes FamilySearch catalog entries state the name of the creator of the microfilm in the author field, sometimes they only state it in the notes below the box at the top of the catalog entry, as in this case.

I look forward to some input on this issue.

Lene, for our readers, let's…

Lene, for our readers, let's go back to basics and build on that foundation. In a situation such as this, three separate things need citing:

Each of these represent a layer of the citation. Evidence Style citations separate the layers with a semicolon. The most-basic ground rule here is that information that is an identifier for one layer should not be mixed into another layer.   In your second paragraph you write:

This statement does mix together bits and pieces of Layer 2 and Layer 3.  The number 50899 is the number assigned by the Family History Library to the film that it accessioned several decades ago. Film number 50899 is not an accession number of the Danish National Archives, which would be cited in Layer 3 as the source for the FHL film.

FHL microfilm 50899 is now available online as FamilySearch digital film 8112571. In addition to the cataloging data to which you have pointed (thank you), the film target at image 3 identifies the record this way: 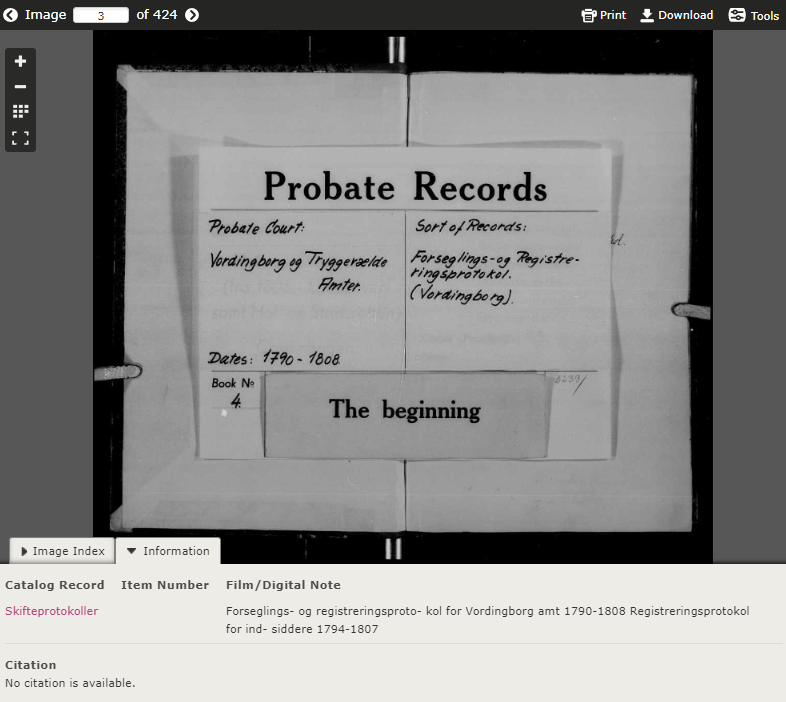 You did not identify a specific record from this film and I do not read Danish, so I cannot detail an example for Layer 1. From the cataloging data, the film target, and what is visible at each image, it clear that Layer 1 would use the basic format for citing a probate register. Below, I’ll plug that basic format into Layer 1 below and then add Layer 2 (the citation to FamilySearch where we found the image online).

The cataloging data at the link you provided does tell us a bit more.

The key line is this:  Mikrofilmet fra manuskript i Landsarkivet, København … which I am roughly translating to English (correct me if I miss a nuance) as “microfilmed from manuscript at the National Archives, Copenhagen.”

That is how FamilySearch identifies its source. That is what we would cite in the third layer of the citation where we report what the provider gives us for the source of its image. The result would be this

Your background knowledge of Danish records and repositories is priceless. However, your personal knowledge is a different issue from (supplemental to) the citation to this filmed image.  In the citation, you identify what you used and what your provider tells you about it.  After you close out the sentence that fulfills that purpose, you are then free to start a new sentence or paragraph and add on any discussion you want to make about changes in the archival system that affect the current location of the record.

Having said all of that, let’s circle back to your first sentence:

"The FHL stores microfilm made by other archives. In the catalog, it is stated who created the microfilm and where it is stored. Is it essential to identify the creator of the film in the citation?"

Are you saying here that the Danish National Archives was the creator of the film and that it supplied a copy of that film to the Family History Library?

I’m not interpreting the cataloging data that way.  That situation does happen. The U.S. National Archives has thousands of microfilm publications that it has provided to FHL. In those cases, both the FHL cataloging data and the initial frames of the film itself will identify the U.S. National Archives microfilm publication by NA's number and title. Ditto for Library and Archives Canada.  (See, for example, the discussion here.) But in this case, neither the FHL cataloging data nor the initial frames of the film tell us that the filming was done by the Landsarkivet itself.

Elizabeth, Thank you for…

Elizabeth,
Thank you for your guidance.

Here's my suggestion for a full reference note (including non-citation elements) based on your comments:

Thanks again for your comments.
Lene

Well done, Lene. As for…

Well done, Lene. As for stripping the long URL down to everything before the question mark, I do this at most sites, including FamilySearch. However, when using a new site or a new collection at a site, I will test the stripped URL by pasting it into a different browser that will not have the page in its cache.

Thanks, I do the same. It would be a shame to shorten a link too much.