I am attempting to correctly cite an entry from the 1911 England Census where the data is imaged from the National Archives and the database from which it came is Ancestry.com.

In drafting this, I referred to EE item 6.51 (online database entries), various references in EE to layering, and other guidance on this site.

I came up with two possibilities.  The first seems like too much information and the second, I feel I'm missing something:

Any thoughts on which may be suitable.  Many thanks, Lindley Roff

Lindley Roff, you’re right. The first example has a problem, but the effort to correct it in the second example went awry for a different reason. Let’s take the two notes in reverse order, given that the second is the easiest to deal with.

Here, your emphasis is on the original, but there are several issues that seriously affect clarity—i.e., someone’s ability to understand exactly what you have used.

Going back to the very basics of citation that are covered in Chapter 2, several different sources can be cited in a reference note (i.e., footnote or endnote).  If we use multiple sources to prove a point, then we cite all those sources in the same note.

Note 1, as constructed, has six periods. That tells your reader that you have cited six sources.  Yes, an experienced user of that set of records can sort out the 98-word citation and realize that you are citing just one source. But most users of our work aren’t experienced researchers. That’s why the basic rule exist: A period creates a full stop. It's the end of our citation to that source.

You’ll note that EE 2.38 also discusses the difference between reference notes and source-list entries. Source lists (bibliographies) are a totally different form of “writing,” with different needs and different layouts. It's also something that's not used by most hsitory researchers until they complete a book and need to create that end-of-the-book bibliography. Source lists are also alphabetized so items can be easily found. Alphabetization is usually under the surname of the author or, in the case of original documents, under the largest "location." To do that, personal names and jurisdictions are inverted and a whole different set of punctuation rules are used.

In source-list entries,  periods are used to separate each element of the citation. That works in a source list—i.e., there is no confusion about where details for each source stop and the next begins—because source lists maintain clarity by putting each source in its own "paragraph."  Multiple sources are not run in together, as with footnotes and endnotes.

Ancestry does not use any standard citation format. While JSTOR, FamilySearch and some archives helpfully offer ready-made citations we can simply copy, Ancestry gives us source descriptions in various ways and usually in multiple paragraphs. Some of its data is presented reference-note style. Some of it is bibliographic style, with many periods separating parts of the description of a single entity.  Some of Ancestry’s data is important to identifying the image we’ve used. Some of it is there because it is important to Ancestry’s protection of intellectual property rights for its own database; copying that into our citation creates redundancy and confusion.

As users, we have to pick through the details to create a logical citation. Then we cite those details following the standard format for whatever it is we’re citing. For example, in the portion of the citation where we identify the record’s archival location, we present those details in the standard order for citing an archival record.

(As an aside, while the specific models for citing English censuses appear at 6.51, the initial pages of the census chapter {6.1 through 6.16} lays the groundwork for understanding censuses and what items are important to cite.)

Because reference notes are written sentence style, we follow the basic punctuation rules for writing sentences —including rules for the use of a colon. In a sentence, a colon is a major, major break. As a rule, a colon appears only once in a sentence. Everything that appears after that colon is considered a single unit, a clarification or restatement of what has already been said If I’ve counted correctly, the first layer of your citation has 8 colons. Where a colon would normally create a break in thought, your readers must readjust their mindset at each colon and link the words immediately before and after—then create a mental break where the next comma appears.

The reason you have so many colons, of course, is that you have copied wording from Ancestry’s own data base, rather than taken the essential identifiers from the document image itself. That formatting works for a database because of the way it is structured: 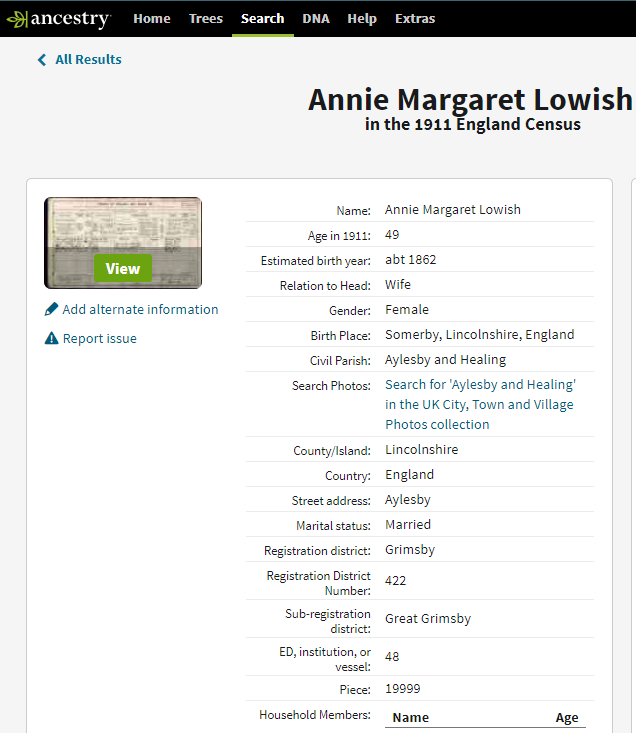 Each element of the database is on a line by itself. Each element follows the format Item label : specific detail.

Again, when we convert an Ancestry database entry to a sentence-style citation, we have to pick the precise words needed and punctuate it the way a citation sentence is punctuated.

(Incidentally, the colon problem also exists in the parentheses that cite publication data. Only one colon should appear. As a standard in virtually every citation style guide, the one colon separates the publication place from the date.)

As you suspected, all of the details that appear in Ancestry’s database entry are not necessary for a citation. As a clue to what is essential to relocate the exact record, look at the “path” that Ancestry describes above the image. It reads: 1911 Census England … Lincolnshire > Aylesby and Healing > 48.

Basic Rule for Creating a Layered Citation for Imaged Records

Each layer is separated by a semicolon. In Note 1, this brings up three issues:

All points considered, EE’s citation to this census entry would be something like this (with different coloration for each layer):

Wow.  EE, thank you so  much.  I am rather a nit picker myself so yours informs rather than bothers me.

You've given me a lot of information to digest and, rather like trying to eat the proverbial elephant, I will try to do so one bite at a time.

I may come back to this a bit later once I've absorbed your thoughts and guidance.  Meantime, thank you so much.

Lindley (Canadian with a British background, heavily influenced by living next door to my American neighbours)

Hope it helps, Neighbor to…

Hope it helps, Neighbor to the North!

EE's punctuation is one of…

EE's punctuation is one of my biggest nit picks. I am "always" trying to get it right - but I do prefer the placement of a comma inside quotation marks (even though I am generally usually/citing non US records). I really enjoyed reading this discussion.

RobynRon, commas and periods inside of quotation marks are definitely tidier, but rarely is there a clarity issue—unlike the question mark, whose position inside or outside of quotes has a meaningful difference. EE tends to have a hissy fit over punctuation only when it creates a clarity issue.