I’m a quandary as to how to incorporate new information that I found into existing citations and would appreciate input. This could well be a case of me not seeing the forest for the trees so please bear with me. I apologize for the length of the post!

Many years ago I began indexing FamilySearch film 1222391 (now available online here). I had ordered the microfilm and proceeded to digitize items 2–4 (records for the village of Podhajczyki) so that I could work on the project at home. For each frame containing the left and right side of the church registers, I took two images (one for the left page and the other for the right). More recently, I have also started entering the data into Roots Magic.

I was careful—or so I thought—to cite my source. See attached image for a screen capture of the citation manager for the birth fact for Helen Haluk.

After sporadically entering over 1000 citations, I realized that I was citing MY image numbers and not the microfilm frames. < sigh> Out came Evidence Explained where I reviewed Chapter 7 and the Quick Check Model: IMAGE COPIES: MICROFILM FHL-GSU PRESERVATION COPY. I also searched the forums on the EE website.

I soon realized a couple of things. First, I need to do better on citing the item of interest and second, that I couldn’t use frame numbers because they aren’t provided on the microfilm. I could count frames but that would be prone to error. So, back I went to have a much closer look at my images to look for page and record entry numbers.

I have discovered the following about the records in items 2–4.

So, to my questions:

Footnote for record from an original register:

Thanks so much for any and all assistance!

Chris, what a challenge you…

Chris, what a challenge you’ve taken on—first to pursue the indexing and now to update 1000+ citations to “fix” the issue of having cited your personal images rather than the FHL image numbers.  (Not to mention the challenge of working in an area that went from Galicia to Poland to Ukraine!)

I must say that I am badly handicapped in any effort to answer your questions because I do not read Ukranian or Russian and my Latin is very rusty. However, I should  be able to validly make a few observations.

I cannot agree that the first imaged book (item 2) “appear[s] to be … an original parish register book.” As you say, it does not begin with an “entry by the priest … indicating the record is a true copy." However, we’re looking at a pre-printed registers for entries beginning in 1785, and preprinted registers were not the norm that early.

Examining the second register against the first, I notice the following:

1. The second register (item 3) begins with a statement that it is a copy. 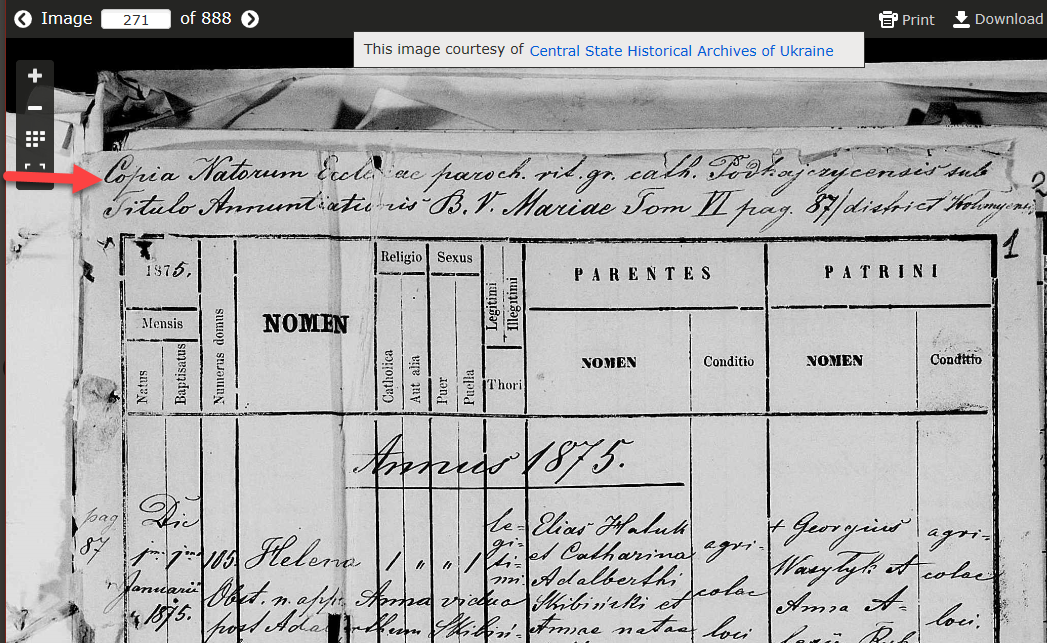 2. The first register (item 2) does not begin with a similar notation, as you say, but the pre-printed parts of both registers are so similar that they were likely created in the same era. (Compare the image below to the image above.) 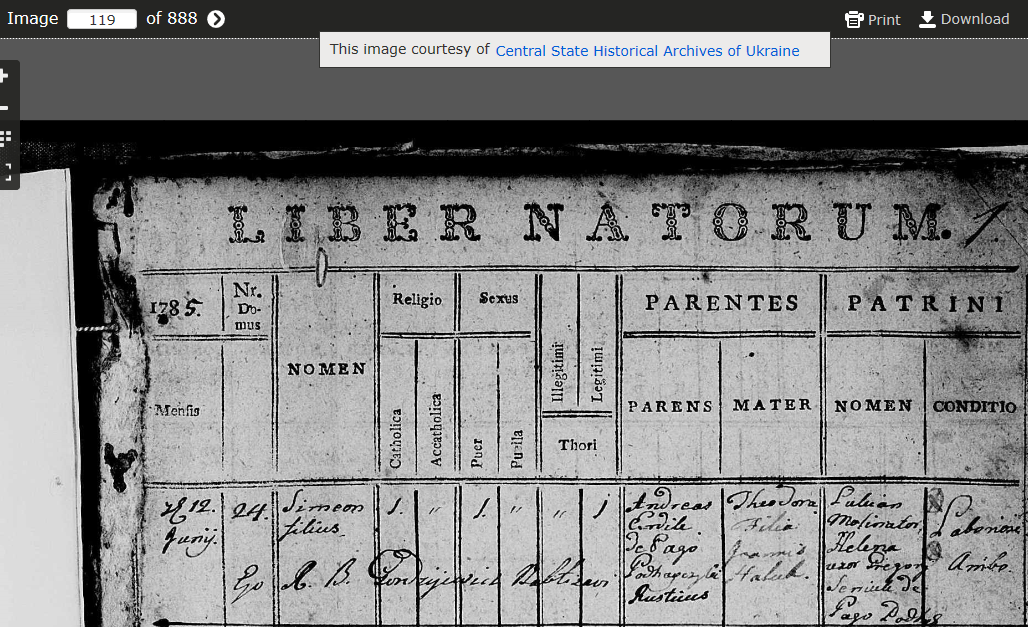 3. The handwriting throughout this register is uniform from the 1785 entries through the 1819 entries. It is highly unlikely that the same priest was there for that entire period and that his penmanship did not get more shaky as time progressed.

4. At the end of the first register (image 260), we do find a clerical note. You’ll notice that the last of the baptisms recorded in this register are dated 1819, but this clerical note is dated 23 May 1834.  While I cannot adequately read the clerical note, when I draw upon experience with similar registers in France, Spain, the U.S. and elsewhere when these form-type, preprinted registers began to be used, I’m inclined to conclude that this register is likely to be a copy made in 1834. 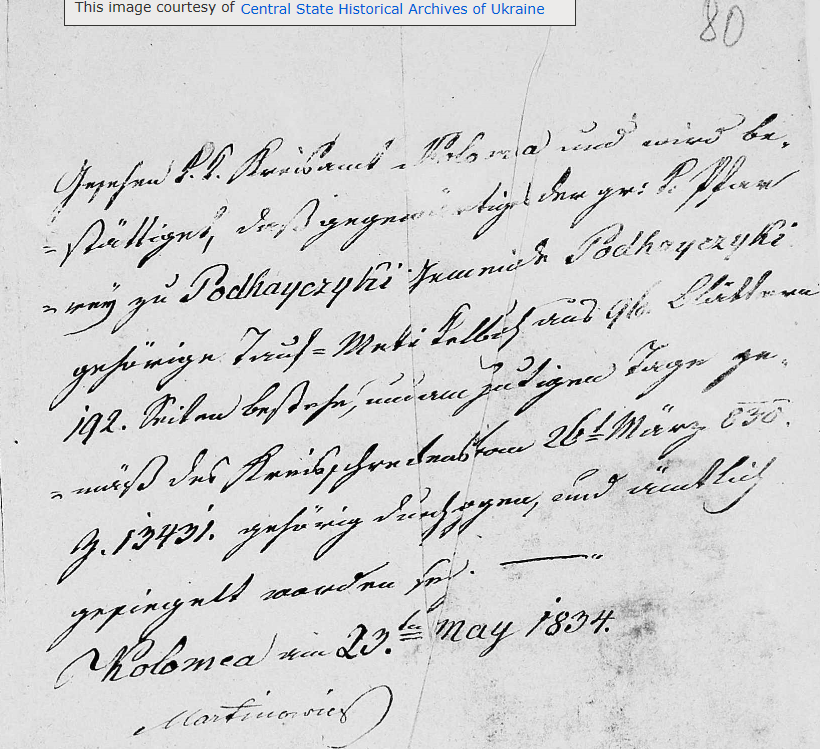 5. Image 245, toward the end of that first register, also contains a couple of relevant notes saying that the transcription was commissioned 20 January 1818 and dating the visitation on 25 May 1818. 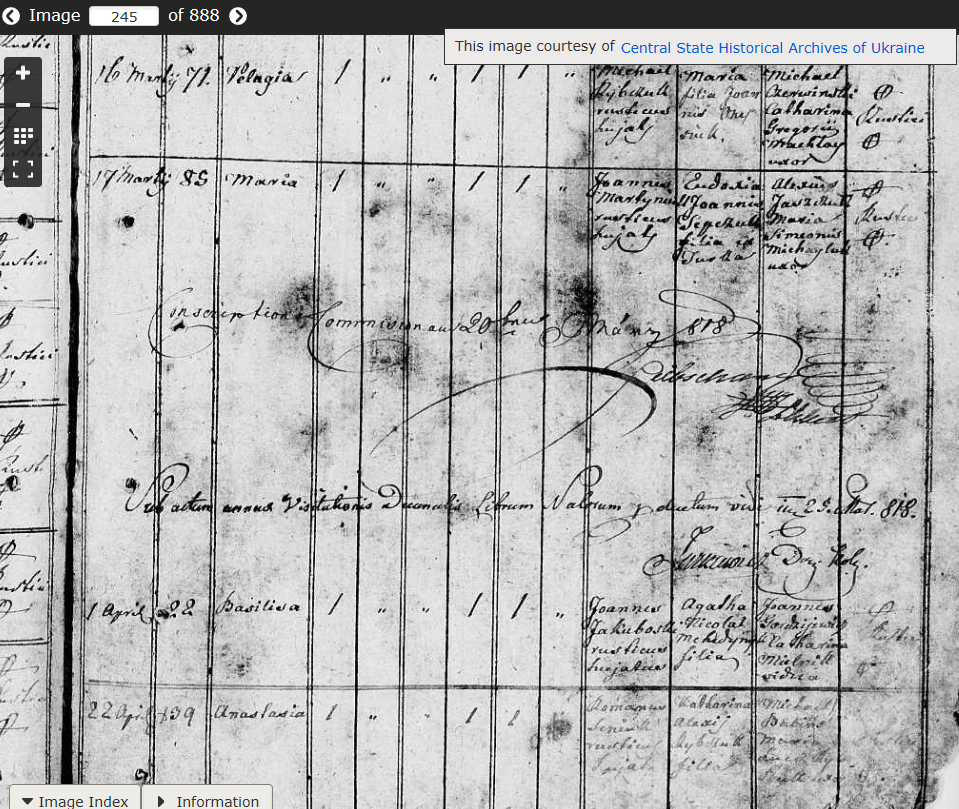 6. Comparing the registers at items 2 and 3 against the register at item 4, we notice critical differences:

In creating a citation from your own analysis, you wrote:

I started with the cataloguing description on FamilySearch (Metrical books, 1785-1931) but these dates includes records from other parishes also included on the film. Consequently, I tweaked the dates to be reflective of the records only for the parish of Podhajczyki. Does this make sense?

The [FHL] film itself actually contains many separate items ... FHL cataloging data is generic data created by the cataloger to describe the entire content of a roll of film.

To identify the specific volume you have used, you should copy the exact title that is on that specific register. If the register has no title, then you should do one of the following … [etc.]

Because you are using unindexed film that is not in a named database, you do not have a database to cite. The standard format for that second layer in which you identify Family Search (as demonstrated in many examples within EE; or see the discussion "Digitized FamilySearch microfilm not yet in a database") would be

Thank you for your detailed…

Thank you for your detailed reply! I apologize for the lengthy day in responding. Life gets in the way of the fun stuff at times.

Yes, this is quite the project. The indexing made sense to me because as I push my family tree back I will need to keep going back to the images. I thought it would be easier to find connections in an Excel index where I can slice and dice the data how I please. As to fixing the citations, well, I'm a little anal. LOL! Better to do it now when I have barely made a dent in the data entry. If I can see this project through to publication of the tree online, I want the citations to be done properly.

I think I may not have been very clear. After the end of each year, a copy was to be made of the entries for the year and the priest would sign attesting that he verified the copy. The image below is an example of that.

There are no such entries in the records for item 2 where the year changes. The image below is one example. The last entry for 1787 is on December 5 (record for Katharina in house 40) immediately followed by the record for Melania in house 74 on January 1, 1788. This is one of the reasons that I considered this to be an original register rather than bishop's copies.

I'm a little confused as to why you think that the pre-printed registers might be created in the same era. The first three digits of the year are pre-printed in the upper left of each image, i.e., 187 and 178 from which I infer they were pre-printed several decades apart.

I do take your point about the relative consistency in the handwriting in records from 1785 through 1819. However, do you not think it would be highly usual to copy an entire register? I wonder what the purpose would be since copies were to be made annually for the bishop.

I went back and took a much closer at the entries. I am still of the mind that is indeed an original register because there is different handwriting during the visitations as you show in image 245. Image 235 is a good example of at least three different people (if not four) writing on the page.

That said, the "Conscription Commission" part bothers me. In the thousands of records that I've reviewed (and not just on this film), copies are indicated by "copia" or "extractus." I cannot find reference to "conscription commission" in the Latin volume of Hoffman and Shea's In Their Words. I wonder if it might be the visiting priest's annotation in the original register indicating that copies have in fact been submitted as required.

This thought comes from an article titled "The Keeping of Church Registers by the Roman Catholic and Protestant Parishes in Austria" by Felix Gundacker, translated by Gabi Rudinger Ferger printed in Vol. 27 No. 2 of the East European Genealogist (of which I am one of the editors). The article includes summaries of various decrees (with some pertinent translations) and section 7 of decree 19 taking effect as of 20 February 1784 as translated states, "During a diocesan visitation it is the duty of the bishops to require that the registers of marriages, of births, and of deaths be submitted every time." Nothing states that an annotation needs to be made but I suppose it would make sense as evidence that the bishop has indeed confirmed this.

I am actually using my own digitized images for this project. I provided online references to make it easy for you. :) I had considered referencing the online images.

Thank you again for your help! It is appreciated.

Oh, rats! Looks like I can't simply past the images. If this works, the three images below should be in order of the three red Xs. 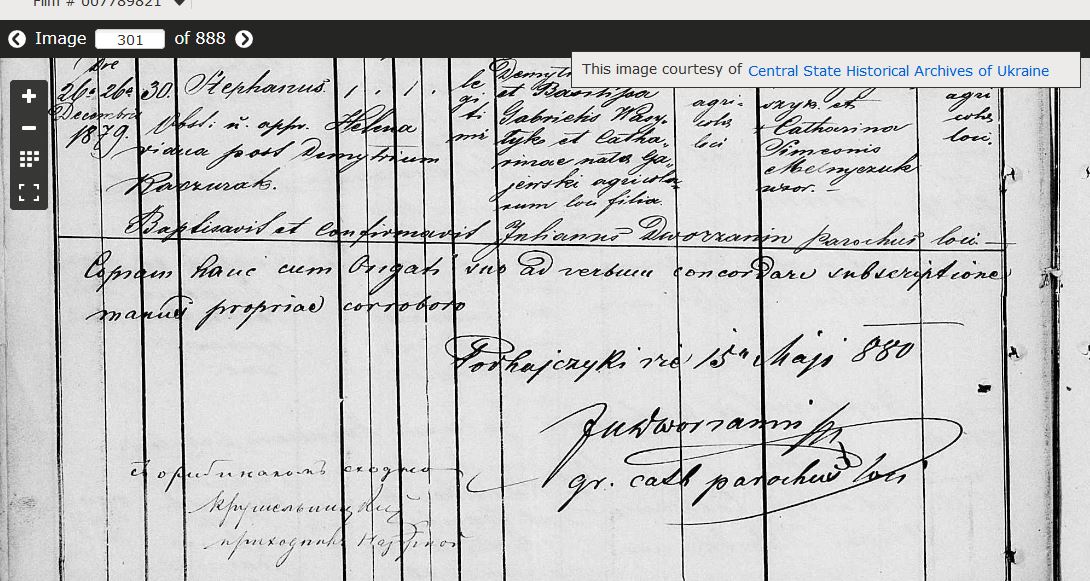 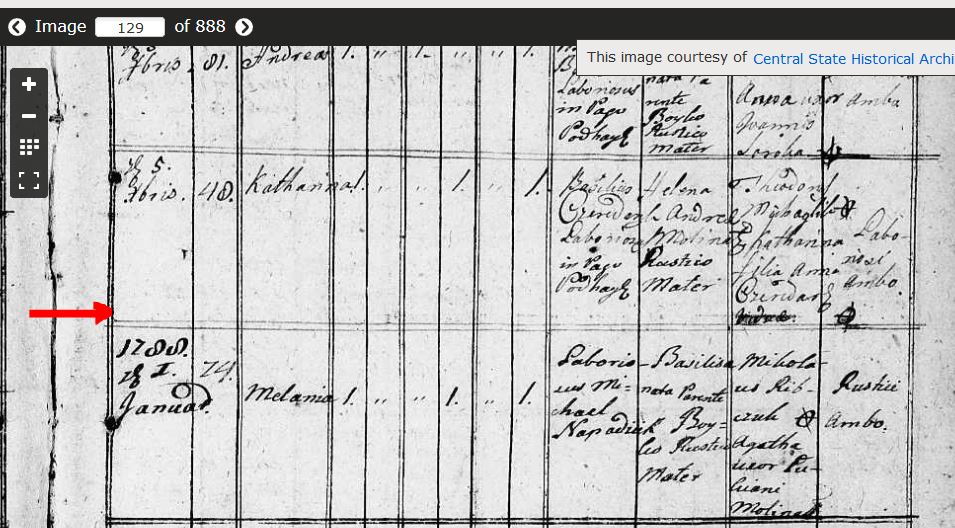