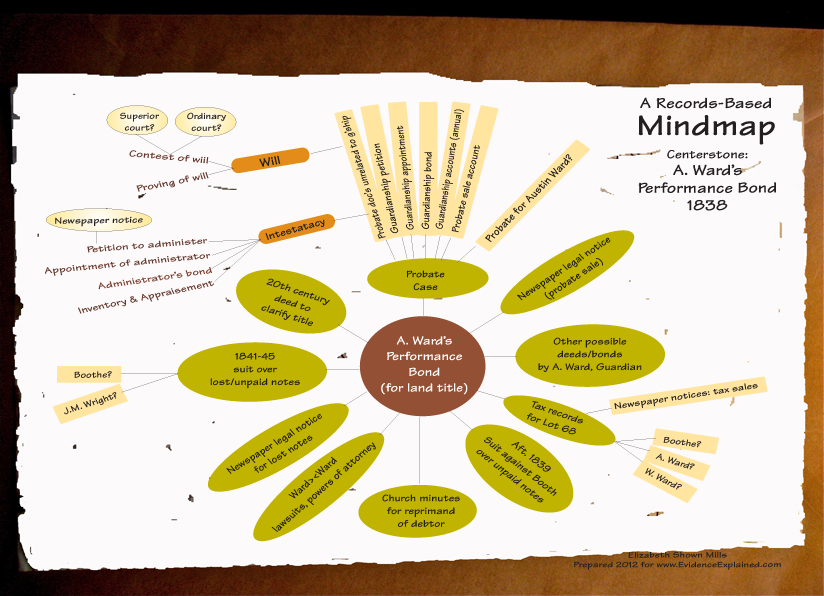 Each record that survives from the past represents a milestone in the lives of those involved. For us, as we explore history, each record should be a stepping stone to something more. More always lies beyond for those willing to scrape away the moss of quirky language and the grit of changing legal landscapes.

A well-analyzed record is a centerstone from which many research paths diverge. That premise presents its own problem: how do we brainstorm the possibilities? How do we track the alternatives?

Mindmapping is one tool we can adapt. British psychologist Tony Buzan, who made mindmapping a modern buzzword, argues that constructive thinking is a free-flowing process—one that branches in unpredictable directions around a single key word.1

Our equivalent is not a word but a document. The research map we need, for each record we find, is one we have to create ourselves. Many available graphs depict for us the organizational structure of historical records. Most are based on record type. Their emphasis is very much upon organization and structure. A research path through historical materials, however, is organic and unpredictable. Its possibilities and its shape depend upon the details of each individual record and the singular life of each person involved in that that record.

QuickLesson 5 analyzed a well-layered document we can use to demonstrate a records-based application of mindmapping. In brief, the circumstances were these:2

Like many documents of its era, this performance bond left researchers with more questions than it answered. Like most, this document is a virtual centerstone from which many research paths devolve. For biographers of Austin Ward and Milton Boothe—or those who study the effect of the 1837 crash upon rural Georgians—many of the questions this document raises should be answerable by mapping and then pursuing those pathways.

Below, we color-map the most productive options we might take. Some record paths are a stepping stone to be tested, primarily the green ovals. Among them, three possibilities are more-complex ventures, each offering alternate lanes and byways to be explored. 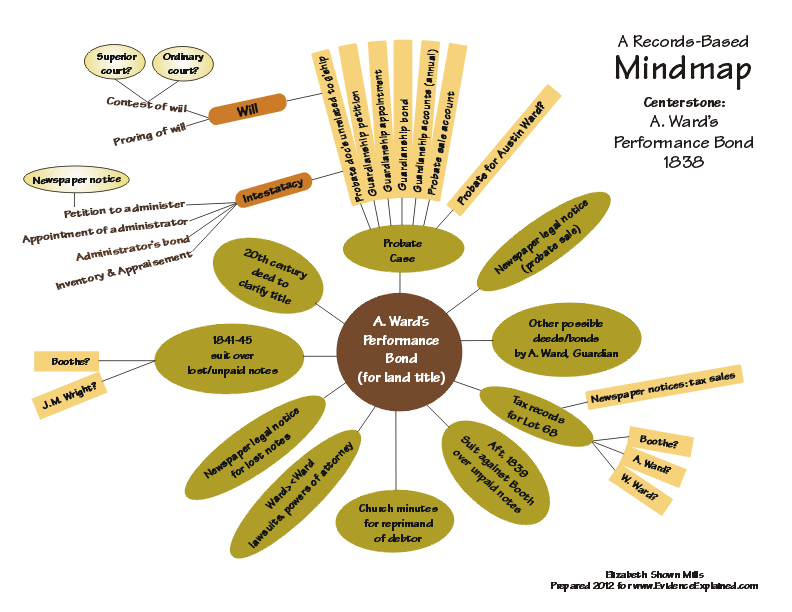 The first stone in this rambling path through Stewart County history was laid when Richard Ward died. He may have died testate (i.e., leaving a will), by the terms of which he chose his own heirs. That document would typically, but not always, dentify the minors who go unnamed in Austin Ward’s bond. A will might also designate Austin to serve as guardian of the minors’ financial interests. Or Richard Ward may have died intestate (without a will), in which case heirship would be determined by Georgia law.3 Each of these alternatives created a different path for legal proceedings to follow.

A thorough exploration of the probate files might also include a probate case for Austin Ward. Given that William Ward, in January 1841, was in possession of the notes Boothe had made in favor of Austin Ward, Austin’s death in that interval is at least a possibility. Alternative explanations for Austin Ward’s assignment of the notes might be his financial distress or his removal from the region.

Amid these probate proceedings, certain actions required the publication of legal notices in the newspaper that officially served that county. The two events that most-commonly triggered a legal announcement were a request for administration and the scheduling of a probate sale. In complex cases, multiple sales might be held. One such sale was likely, but not necessarily, the event that Boothe attended. Because most probate sales were community-based, attendees were commonly friends, kin, and neighbors of the deceased. Thus, Boothe and the Ward family could have had a close relationship prior to the 1838 sale of the lot on terms quite accommodating to Boothe. However, as guardian of the minors, Austin Ward also might have chosen to hold his “public outcry” of the lot in the courthouse square. More thorough research should determine whether a Ward-Boothe relationship existed before the sale.4

Other deeds or bonds

A thorough research path would also include a reexamination of the deed books for other documents relating to any of the individuals involved. The context they provide could be enlightening or it could be crucial.

Annual tax rolls, both assessments and collections, were mandated by Georgia law. Few of these survive for early Stewart County. The one roll critical to the period in question, 1841, should clarify whether Boothe remained in possession of the property or whether its management had reverted to Austin or William Ward. Given the dire economic times, newspapers should also be consulted throughout the 1839–47 period for the annual notices of tax sales scheduled for properties whose taxes were delinquent.

Any surviving record books of churches in the vicinity of the Ward and Boothe residencies might shed additional light on the economic difficulties faced by these men—particularly Boothe. Many men were not churchgoers in this society, but those who held membership in a Protestant denomination were expected to settle their debts in a conscientious fashion. Protestant minutes frequently record admonishments of church members who were perceived as dodging financial obligations. If, in the middle of financial difficulties, a member decided to move elsewhere and asked to transfer his letter of membership, that letter might be denied. Those requests and the decisions upon them were also, typically, recorded in church minutes.

Ward-Ward lawsuits or powers of attorney

William Ward’s published notice of January 1841, stating that he was the legal owner of the notes held by Austin Ward, suggests further legal transactions between these two men during the 1838–41 time frame. The notes might have been transferred as a result of debt. Or, if Austin Ward chose to move elsewhere, he might have appointed William Ward to serve as his attorney of fact (i.e., an agent, not an attorney-at-law) to settle his financial and legal affairs in Stewart County. In both cases, transactions are typically found in the court minutes or deed books.

At least one such milestone on the Ward-Boothe paper trail has already been found. Others might exist.

As noted in QuickLesson 5, William Ward’s 1841 mishap with his pocket book full of notes created an escape hatch for Boothe, if he sought relief from his financial obligation. The documentary trail clearly shows that the case was settled by September 1847 and likely by December 1845. The possibility of legal action in this period is great enough to warrant a thorough search. Any legal action against Booth’s surety, J. M. Wright, should also be studied.

The 1847 filing of the performance bond originally signed by Austin Ward puts on record his intent to provide Boothe with a clear title to the lot. However, the filing of that bond as a substitute did not constitute a clear title with a guarantee against any and all encumbrances. In many such cases, after the passage of the number of years stipulated by state law, the holder of the property would take legal action to obtain a clear title deed. Most such documents are found amid twentieth-century deeds or court records.

Historical research rarely, if ever, takes a straight path from the point of our initial inquiry to the point at which we feel our questions have been answered. By nature, our research begins with the known and plows through the unknown until a conclusion is justified. Thorough research can prompt many detours and changes of direction. But every successful effort will begin with a plan—one that should be continually reassessed as our efforts eliminate some possibilities and uncover new ones. Throughout the course of a project, mindmapping is a valuable tool to keep our work focused and thorough.

1. Tony Buzan has produced many books on the topic. A good beginning point would be How to Mind Map: The Thinking Tool that Will Change Your Life (London: Thorsons Publishers/Harper Collins, 2006).

3. QuickLesson 5 details (and cites) the major provisions of Georgia law that would apply to this case. The basic reference work is Thomas R. R. Cobb, ed., A Digest of the Statute Laws of the State of Georgia in Force Prior to the Session of the General Assembly of 1851, vol. 1 (Athens: Christy, Kelsea & Burke, 1851); accessible via Google Books (Books.google.com). Unnumbered page 290 of this digest provides a “Table of Descents,” charting the heirship paths Georgia law would take.

4. Georgia’s statutes in this era required auctions “before the courthouse door” for notes, bonds, debts, and financial transactions, as well as slaves. However, it did not pose that requirement for probate sales of land and personal property. See, for example, Cobb, Digest, pages 131, 139, 338, 513–14, and 978.

Each record that survives from the past represents a milestone in the lives of those involved. For us, as we explore history, each record should be a stepping stone to something more. More always lies beyond . . .